In the month of feburary, I chose to act on whatever I said I will do: be more deliberate to read and spend some time introspecting on some topics on hiring.


In this article, I will be covering the few topics:


How to build strong tech team?

Figure out the next 5 steps, but execute one step at a time. You do not climb mountains in 1 step. You do it step by step. In this article, you can see which roles should be held by the founder while you hire in for the operational roles. You can find out what type of engineers you need for each stage of your startup. The personalities of your engineers will be an important criteria to consider.


Do you really need leetcode?

While it test for logical understanding, it tests the candidates exposure of problems rather than the candidate’s ability to think of the right solution. While its not right, i guess big tech companies can only use exposure as a proxy for ability to cover wide range of technical problems.


Yes, you may not end up using the algorithm you are tested in your day to day tasks, but at least it tests the engineer’s ability to figure out the solution from his/hers wide exposure to technical issues


How to manage software engineers without micromanaging

Consider your KPIs and OKRs. Do your daily meetings to find out their progress and pace.


Demonstrate impact through learning, experimentation and mentoring. With a good learning trajectory, you can typically expect good quality out of your engineers. You can then relate how performing well in the company + their current scope of work is linked to their own personal growth as well.


One of the points to note is how the little mundane tasks can be automated to help create more leverage for themselves. See how you can set up your engineers to consider boring work as an opportunity to find a new job, but rather an opportunity to find out how ops can be set in place to automate these tasks - boring but necessary tasks.


If they are teachable and demonstrate strong growth mindset, you can consider helping them to develop a curious outlook towards tech and biz processes.


Help your engineers develop work-life balance goals. You don’t just want to talk about it. Talk can be cheap. You want to get into a little details on how they can help support your company’s engineering demands outside of hours but also ensure it is within their comfortable level of work-life balance.

Knowing which page do people ask for help, can be a good indicator for you to put your tooltips and tutorials.


You want your app to feel like a home to them, being able to do simple customizations like adding emojis into the titles etc. Slack does it well.


You want your users to feel comfortable. Want them to use your application as if its their own little space. Emoji setup can be a simple way to allow users to feel this way.


Designing with the white space insights.


What is your technical team philosophy?

What kind of manager do you want to be?
You want to be a coach. You delegate roles to different team players and you coach them to be better in the roles assigned. You don’t come in to micro-manage them.


Try not to point out wrong immediately

As engineers, its easy to find out flaws in logic and especially so in pull requests. In code review, to be efficient, you have to be good at pointing out mistakes. But take a pause. Try to figure out how to point out mistakes that can help mentor/build the engineer’s skillset to improve. The delivery of mistake is just as important as spotting one.

Nvidia’s ARM deal will not go through

The whole world is strongly opposing the deal from going through. It is interesting how much impact the world perceives of this deal.


The Man Putin Fears The Most
Random video that helps us to understand abit more on Russia’s most powerful man.


If you want to move things you need influence. It is interesting how one keeps influence. Genuinely no comments on whatever choices that were made in the world but its a good reminder that while tech can advance things. Technology in itself is neutral. The intention of using the technical determines whether the technology is ‘good’ or ‘bad’

The first tweet by Jack Dorsey is sold for 2.9 mil.


Interesting idea if you can create a website that does only adds in JPEG and you sell it by the number of pixels. And you can accept only coins.


In blockchain, the group verifies the group’s every transaction.
NFT is able transacting on intangible items that have value because its unique.


Set some work boundary for yourself

In the concept of Software Development, you should find yourself splitting your time up between documentation, testing, discussion and coding. You have sufficient time to do all of these and sometimes productively with the right environment setup. Make sure you set up time for your deep-flow work (debugging a difficult code logic). Make sure you set up time for deep reading, exploring a new architecture. If you are in management position, you should definitely set up time for some mgmt training and self learning. You cannot consistently be stuck with operational stuff and lose out on developing yourself and thereupon your team for the next few quarters ahead.

Making components easier on the eyes is important to make a smoother UI component for your users. It has some psychological effect on the the users viewing the element

What is difference between code splitting and lazy loading?


Objective is the same: improve the speed of your application


Why are we getting streams in redis?

There are a few types of implementation on Redis.


When its blocking, used with an empty list, the connection from the client to Redis will be blocked until a new element is added.


When the list is blocked, a message is added to the list, the subscriber that has been waiting the longest will immediately pop the message off for itself.


Streams can handle more than just string elements. The internal strucuture of messages is a set of key-value pairs, so you messages can actually ahve complex structures directly in Redis (instead of stringified JSON objects)

Understanding dependency inversion is key. Understanding the different layers of your application is crucial on its separation of concern.


The baseline of web development in 2022

You can find the news here.

Today, we are at the next stage of that journey: we are announcing that the future of Internet Explorer on Windows 10 is in Microsoft Edge. - Microsoft


Helps to address compatibility for older, legacy websites and applications.

In fact, Microsoft Edge is the only browser with built-in compatibility for legacy Internet Explorer-based websites and applications, including support for functionality like ActiveX controls.


The support for IE has subsequently dropped by Yahoo, Wordpress, Japan.


Typically IE has been used as the baseline for web development - aka that is the lowest level of browsers you should be adjusting your applications for. Now that IE is retired, there will be a new baseline.


Note that the rate of Safari users in Japan has been higher than global average. More than 66% of Japan internet users are iOS users.


If you have differences in OS, then you can expect the hardware to be different accordingly

All browsers in iOS are based on Webkit: There are Chrome and Firefox versions for iOS but those use the same engine as Safari in iOS. This is because of an Apple guideline which mentions that all iOS browsers must use Webkit. 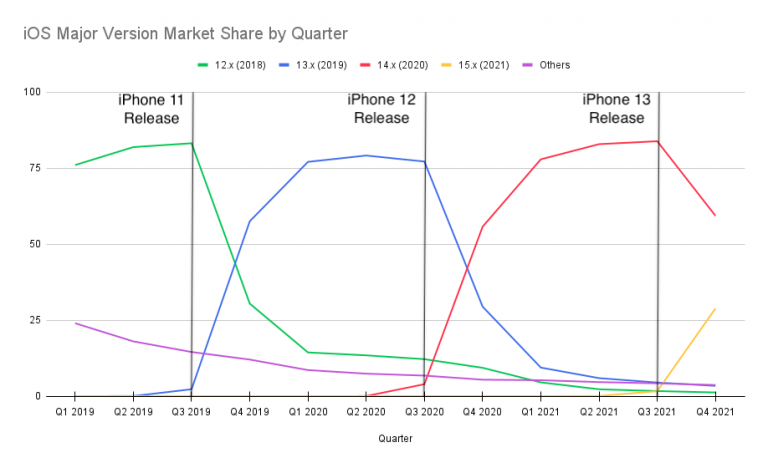 
Note that browser support has to also consider browser versions for a more complete implementation support.


So what is the new baseline?


Some current standards across the world


So typical websites now passed the standard for HTML and css, but has exceeded the quota for JS file sizes.


Median number of HTML elements: 31 - including

, that means websites are displaying less content per page.

In the list of the most used HTML elements,

is 7th. Moreover, the probability of a page having a

element is 98.9%; it’s definitely the most used element to display contents.


Note there are some elements with no special styles applied to it but has a semantic meaning. The usage of

can be taken as an indicator of how many pages are proactively using semantic elements.

Difference in flex and grid.


IE only supports an old specification of Grid (flex) so pages that want to support IE must take that face in account. CSS features cannot be polyfilled as easily as JS Features, thus not alot of people are using Grid. Now that the support for IE is over, grid can now become usable.

Given the more than average size of JS sizes coupled with mobile devices with lower CPU power, the performance of websites on mobile are slightly lower.


Since CWV is a ranking factor in Google search. Top 1000 sites based on views have good CWV scores.


Improving website performance is one of the ways we can directly increment revenue in our projects.

Domain driven architecture is important to keep your code base centered around the business domains instead of the technical tools. Tools are just tools, you are putting tools together primarily so you can focus on solving biz domain problems; let your code base reflect this.

Engineers spend too much time figuring things out on their own before they get feedback. You should ideally get at least 1 round of feedback weekly or if not daily on your tasks. You want to quickly iterate and get feedback so you can deliver the best product as fast as possible.

If your application is sufficiently huge but not properly set up with separatable domains, microservice splits may not be an option available for you

always list out the painpoints you wish to solve with the switch to microservices. Move with a purpose. A strong one if possible. Listing out your pain points can help to reflect on the success of the shift to microservices. Are you now able to serve more concurrent users with the same specs of resources?


For short lived messages: Redis
If you do not need persistency, then consider redis. Fast service


For large amount of data: Kafka
Its ideal for 1 to many when persistency is required